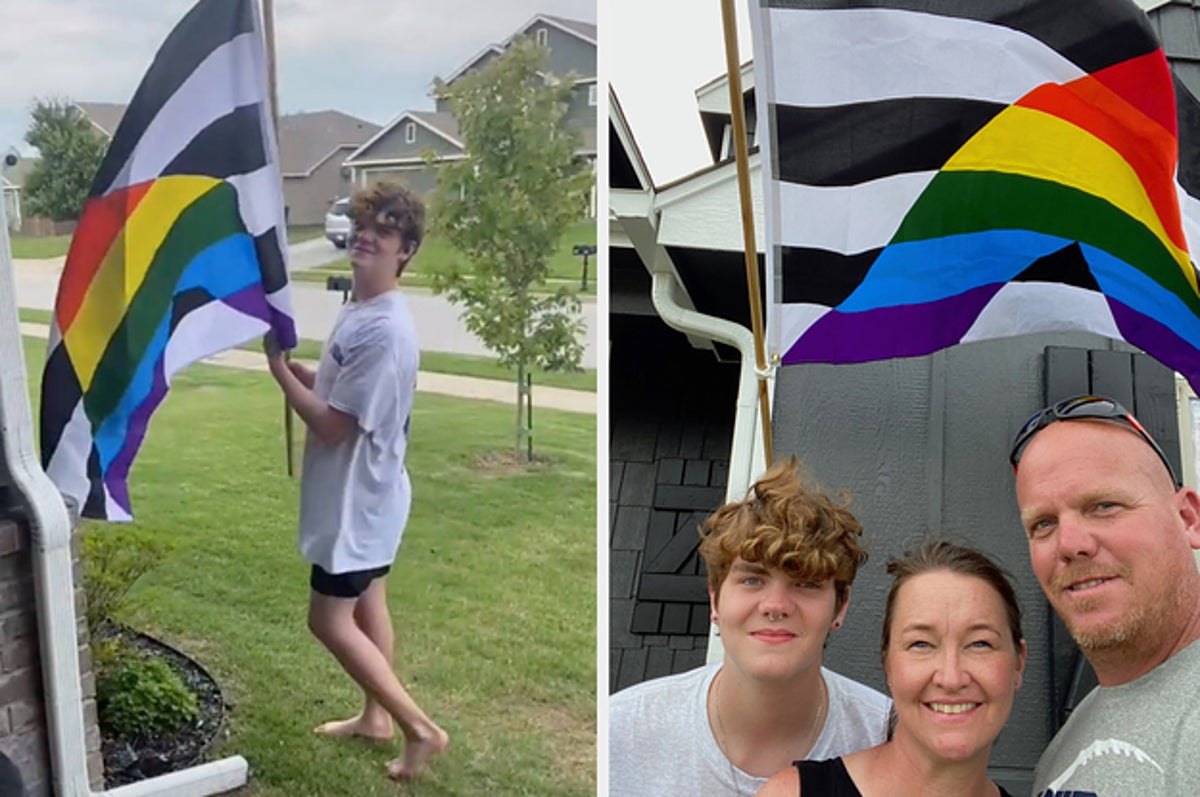 On Sunday, just over a year since he came out, 15-year-old Caden Wyatt told most of the people he had had that he was gay, and he did so with his father by his side.

For the first time in their lives, and probably one of the first in their neighborhood, the Wyatts hung a flag outside their home to celebrate Pride Month.

“We’re getting ready to shock Oklahoma,” 45-year-old John Wyatt announced to both his neighbors and more than a million Tik Tok users, to the rhythm of Lady Gaga’s “Born This Way” playing in the background.

A TikTok John posted about the family’s big milestone has gone hugely viral in the four days since it was posted, generating a lot of support, praise, and heartfelt comments.

“I am very lucky to have such supportive parents, because I know that many other people are not as lucky as I am,” Caden told BuzzFeed News.

The Wyatts live in Owasso, outside Tulsa, a strongly conservative community. “There are a lot of Q flags in our neighborhood, a lot of Trump flags and Blue Lives Matter flags, [but] You don’t see any pride flags at all, ”John said.

John admitted that he was not always so supportive of the LGBTQ community; For most of his life, he was very conservative and religious. But that changed when he and his wife came up with the idea that Caden, who was still a little boy at the time, might be gay. “That’s when we really started hugging [the community], because we knew our son was gay, and at any moment he could come out of the closet, “said John. “And he needed to see that we were going to be able to support him and be there for him.”

The flag the family hung outside their home is the “Allied Flag,” with a rainbow letter A on a black and white striped background, which Caden and his mother bought at their city’s first Pride festival. last spring. Caden has a classic pride flag hanging in his room, but he hopes the allied flag will serve as a symbol that his entire family supports the LGBTQ community. “I want people to know that my parents are behind them, and so am I,” Caden said.

The Allies flag has sparked some debate among TikTok commenters, some of whom have objected to the idea that it focuses on straight and cisgender people. As John explained in a follow-up TikTok, “the black and white bars represent the straight and cisgender community, allies … and of course the rainbow colors in the ‘A’ represent the LGBTQ + community. “. John said he researched the flag to make sure he wasn’t promoting something he shouldn’t be, but he got even more comments from people saying they loved the flag the family chose. “[Caden] he’s the one who told us to buy this flag to show his support … but I’m not above investigating a bit more, ”he said on another TikTok.

Despite the vast amount of support online, the flag has thus far received no notable reaction from the Wyatt’s neighbors – a pleasant surprise, as they were concerned it might be stolen or vandalized.

“We are letting people know that it is a safe place,” John said. “I’m not trying to cause any controversy in the neighborhood, but maybe there is someone who sees that flag, smiles and feels safe.”

Nancy McDonald, former PFLAG national president and founder of its Tulsa chapter, told BuzzFeed News that hanging a flag can be a meaningful way for parents to show their support for their LGBTQ children, whether it be an allied flag or the pride that is seen more commonly. flag.

“If you need a symbol, a flag like that, that’s fine,” McDonald said. “I choose to wear the rainbow flag because that tells people, yeah, that’s a family that supports their gay son.”

Many people have commented on the family’s TikTok, saying that they wish their own parents would accept their sexuality or gender.

John said he hopes his family’s flag will be a reminder to others that they are not alone.

“Every time I get a comment like that, I tell them I have it,” he said. “If you need someone to talk to, I’m here. And if you need a ‘hug from dad’, I’m here. If they are local and need to come to dinner, whatever, our house is open to them. “

Exposing himself so boldly wasn’t easy for Caden, but he’s delighted that he did.

“I was a little nervous at first, because I didn’t know how people were going to act, but I really don’t care what they think anymore,” he said. “I’m just going to be myself.”