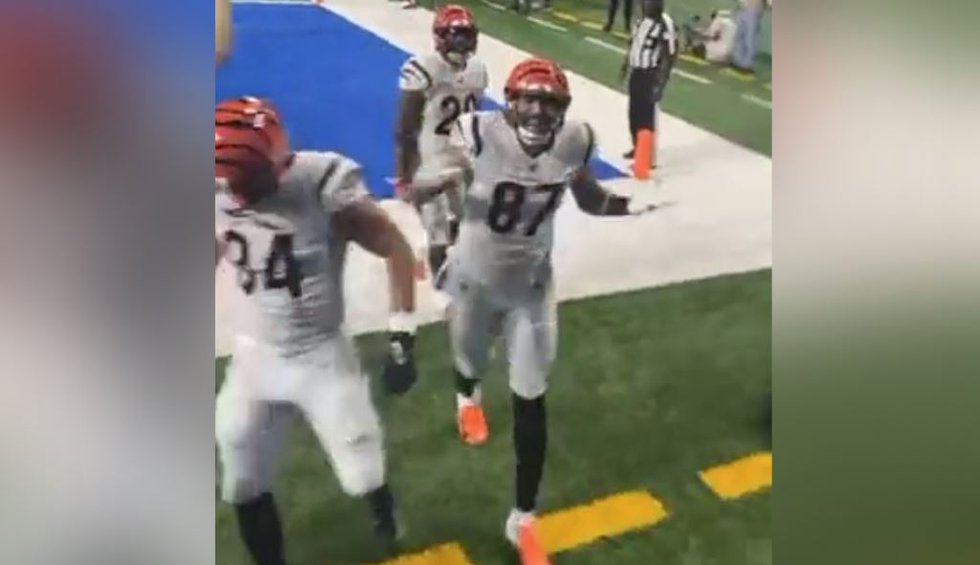 CINCINNATI (WXIX) – Video from Bengali’s phone in Sunday’s game against Detroit it has got big troubles for hours.

great attention. An ideal place to be instant. More than a million views less than a day. Report from the likes of the Blecher Report and the NFL.

Sebastien Day is the cameraman, the man whose phone captured the momentum in the fourth quarter when CJ Uzomah scored the Bengals tight end.

Uzomah and his comrades ran together against the wall at the corner of the border to celebrate the day with the Superfans and their allies, the first rank.

“I think we’re so much brighter than we were all around us,” he recalled.

He had his phone records that day.

“[Uzomah] my buddy tried to give me a high five right next to me and just hit my phone,” he said.

Day fumbled the phone and hit the turf. That’s when Bengals running back Joe Mixon flew in and grabbed it.

But he did not give up for the day, not the first. Instead, while still recording on the phone, Mixon turned around and shook the NFL weekend momentum.

“He was awesome, he threw it at me, and they went back to beat the Lions,” Day said.

lucky for him. Not so happy with his phone, which now sports a web of hairline cracks across the front of his screen.

When Uzomah returns to the table.

“CJ reached out to me and said he would give me a new phone,” Day explained. “I’m not too worried about it. I like what I have on the phone and said that I could hook up some buttons. […] I’d rather have tickets than phone. “

Turns out, it could have gotten both days.

Uzomah messaged Day, offering to send him the “last” football on the market and send tickets to see the Bengalos against the Steelers or the Browns at Paul Brown Stadium.

Do you see spelling or grammar errors in our story? Please include the title with click here to report.