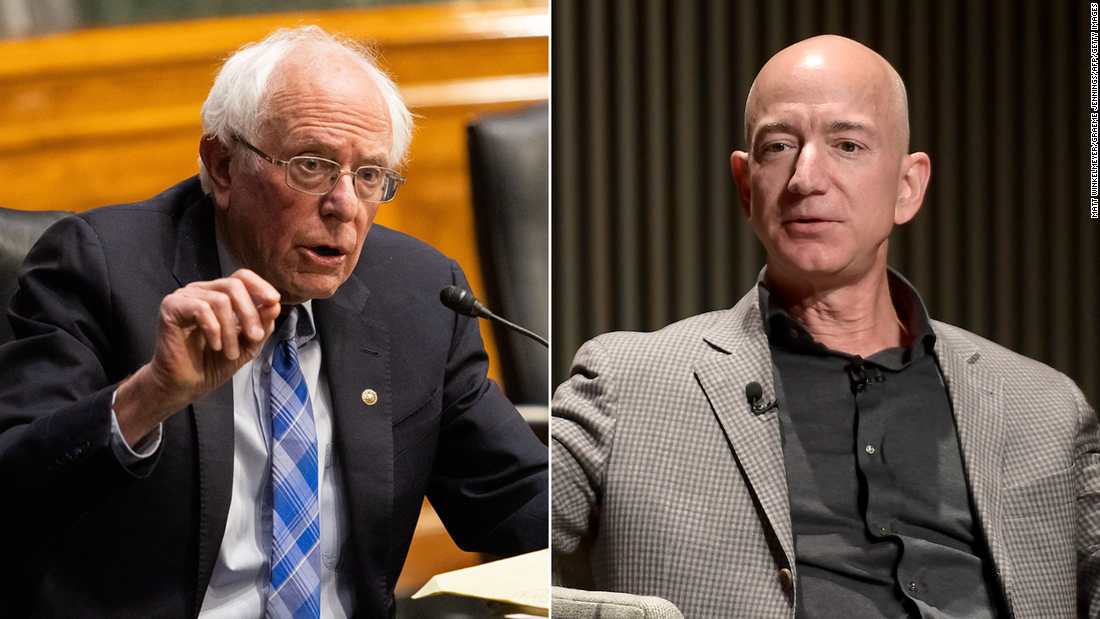 The company told the panel Friday that the Amazon (AMZN) founder is unable to attend next week’s hearing on inequality, Casca told CNN.

In a statement, the e-commerce giant said that it is supportive of a $15 minimum wage, a policy the company implemented for its own workforce several years ago.

“We fully endorse Senator Sanders’ efforts to reduce income inequality with legislation to increase the federal minimum wage to $15 an hour for all workers, like we did for ours in 2018,” an Amazon spokesperson told CNN.

The Washington Post first reported the news of Sanders’ invitation.

“Jeff Bezos, the wealthiest person in the world, is in many respects emblematic of the unfettered capitalism that we are seeing in America today,” Sanders said in a statement to CNN earlier Friday, before it was announced that Bezos would not attend.

He was invited to testify “to explain to the American people why he believes it is appropriate for him to be spending a whole lot of money denying economic dignity to Amazon workers in Bessemer who want to form a union, while he has become $78 billion richer during the pandemic and is now worth $183 billion,” Sanders said.

Bezos announced last month that he would step down as Amazon’s CEO later this year.

The attempt to unionize the Amazon fulfillment center in Bessemer, Alabama, has become the focal point of a growing struggle between Corporate America and labor groups to unionize within companies and states that have resisted such efforts. The election results in November have emboldened unions to expand their ranks, and President Joe Biden has offered his support to the workers attempting to organize in Alabama.

This is not the first time Sanders has attempted to challenge corporate leadership at its highest ranks. During his campaign for the Democratic nomination for president, Sanders traveled to Bentonville, Arkansas and spoke at Walmart (WMT)‘s annual shareholder meeting about the company’s treatment of its workers.

Sanders offered a resolution to put an employee on the board and increase the company’s minimum wage. The resolution was defeated.

In his new role as Budget Committee chairman, Sanders has a powerful tool to call attention to his concerns about economic inequality. He engineered an attempt use budget reconciliation to insert an increase in the federal minimum wage to $15 an hour in the Covid relief package but the plan was turned back by the Senate parliamentarian. Sanders has vowed that his mission to raise the minimum wage is not over. He has said he will attempt to use reconciliation to get it passed in the future if Republicans refuse to support an increase.

Republicans continue to be skeptical of attempts to expand union ranks across the country and bust up laws in red states that prevent workers from being forced to join unions. GOP Senator Marco Rubio from Florida penned an op-ed in USA Today where he argued that creation of a union at the Amazon plant in Alabama would lead to fewer jobs and smaller wages.

“Adversarial labor relations are generally harmful. When it is a good American company — for example, certain American automakers — adversarial relations risk hurting labor and management alike by causing American industry to lose ground to foreign competition. And too often, the right to form a union has been, in practice, a requirement that business owners allow left-wing social organizers to take over their workplaces,” Rubio wrote.

The Florida Senator however was in agreement with Sanders on Bezos and Amazon who he accused of using “anti-competitive strategies to crush small businesses.”