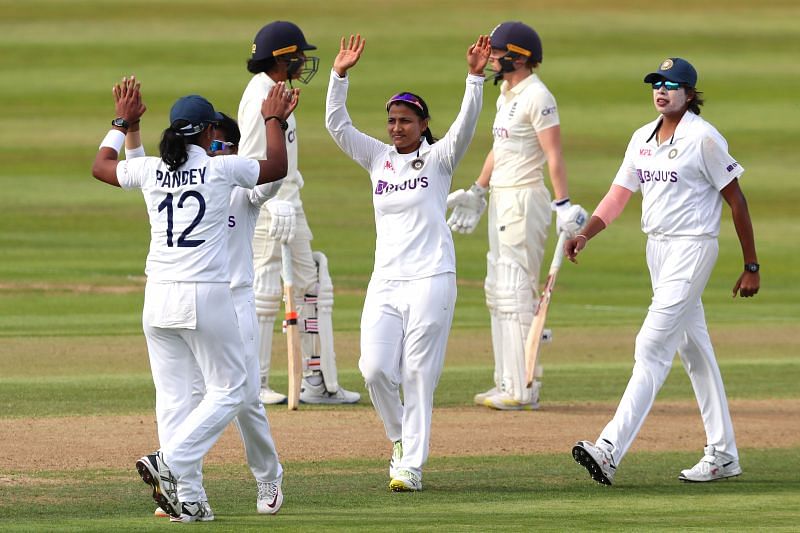 As many as five visiting players made their debut as India Women they returned to the format after seven years in a one-off match against England Women in Bristol.

After England captain Heather Knight won and chose the bat, the Indian bowlers failed to break in early, but returned to the final in the final. The hosts finished 269/6 at the end of the daily game, while the used field remained for the most part.

Here are the three main points of conversation from the 1st day of the Indian return of women to test cricket.

# 3 Indian pacers could have bowled more

After being thrown out on the field, the Indian bowlers got a little moving in the air with a brand new Dukes ball. While Jhulan Goswami,, Shikha Pandey i Pooja Vastrakar when they politely bowled in the first session, they could probably have achieved better length.

Goswami, all 38 years, tirelessly sent a few overs in the first two sessions. Although she induced a blade that was shelled on slips, she was probably too short with a new ball. When she tried to put an English bat on the front leg, the end result was usually self-confidence against over-delivery.

All three Pandey, Goswami and Vastrakar bowled well considering the circumstances, occasionally beating the bat and forcing the unusual to maintain the line. But their lack of precise accuracy meant that India had to resort to turning very early in the piece.

Hitting first in the challenging Bristol goalkeeper, English openers Lauren Winfield-Hill and Tammy Beaumont showed great application and determination to separate the first session of the test match with a significant difference.

An unusual chance manifested itself, but Winfield-Hill and Beaumont dug in soon after seeing the new ball. They made excellent use of the momentum against Sneh Rana’s turn and were serious about everything that was missing from the pacemaker.

Winfield-Hill couldn’t take advantage of its start while Vastrakar scalped his children’s test, but Beaumont and Captain Heather Knight merged a calm, assertive partnership. The skipper, hitting in 3rd place, made 95 with 175 balls, while the opener was thrown for 66 out of 144.

Even previously out of form Nat Sciver joined the party, scoring 42 of 75 balls, before being captured by Deepti Sharma in front.

# 1 Has India’s dubious decision to play Sneh Rana paid off?

India made a big call to throw in a one-time test against England by handing Snow an early test debut.

The off-line selection against an English striking team that primarily has right-handers was an unusual decision, especially ahead of choices like the experienced Ekte Bisht and Poonam Yadava. It was believed that even Radha Yadav, a precise spinner with his left hand, was in front of Rana in the rows of boiling.

But on the whole, at the end of Day 1, it can be said that the Indian decision is justified. Rana took a couple of overs to catch up to the rhythm, but once she did, she consistently challenged both edges of the English striker. The 27-year-old eventually took goalkeepers Beaumont, Amy Jones and Georgia Elwiss in form, and bowled well in tandem with another spinner in Deepti Sharma.

While it is impossible to say whether Bisht or Yadav would have had a bigger impact, Rana achieved top performance in her first outing for the Indian team after four years.

How to use Faust in Guilty Gear Strive