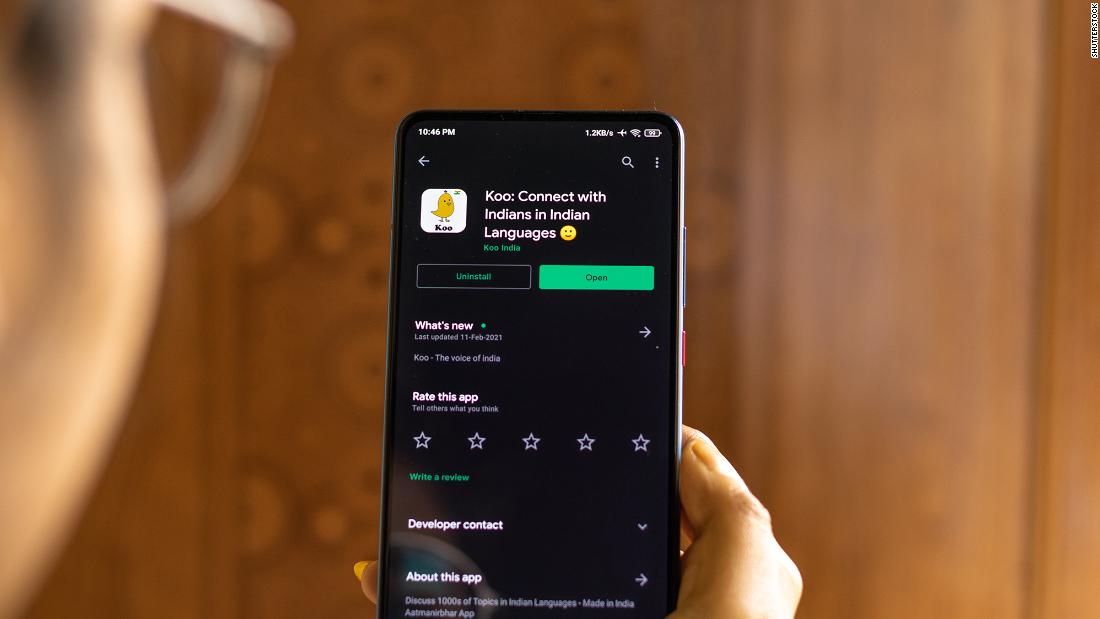 “It feels like … you’ve just been put in the finals of the World Cup suddenly and everyone’s watching you and the team,” Mayank Bidawatka, co-founder of Koo, told CNN Business.

Koo, touted by India’s Prime Minister Narendra Modi and used enthusiastically by several officials and ministries in his government, has been downloaded 3.3 million times so far this year, per app analytics firm Sensor Tower. It’s a promising start for a company founded less than a year ago, but less than Twitter’s 4.2 million Indian downloads during the same period.

However, the Indian social network, which sports a bird logo familiar to any Twitter user, was downloaded more times than Twitter in the month of February — when the Indian government called out the US company for not doing enough to block accounts sharing what it called “incendiary and baseless” hashtags around a protest by farmers against new agricultural laws.

“We’re building as fast as we can,” Bidawatka said.

Over the past couple of years, the Modi government has ratcheted up its pressure on global tech companies. It recently imposed stringent restrictions on the likes of Facebook, Twitter and YouTube and reportedly threatened their employees with jail time, less than a year after banning dozens of Chinese apps, including TikTok and WeChat.

Against that backdrop, homegrown alternatives to many of those services have cropped up to try to take advantage of a burgeoning techno-nationalism — and some, like Koo, are quickly gaining traction. The two most downloaded apps in India so far in 2021 are TikTok-esque short video platforms MX Taka Tak and Moj, ahead of Snapchat, Instagram, Facebook and WhatsApp, according to app analytics firm Sensor Tower.

Bidawatka praised Twitter’s service and said the government backlash against it and other tech platforms is “unfortunate.” But he doesn’t deny that the government’s clash with Twitter has given Koo and other Indian apps a boost, adding that local apps have a better understanding of the market and can step in where big global tech firms fall short.

“A lot of the global tech giants have India as a part of their roadmap as far as growth is concerned, but they’re also a little worried about making big changes to a very stable global product to cater to a market like that,” he said. “We have the talent, we have the resources, some of us have the experience, there’s funding available for fulfilling dreams like these. And these are pretty large dreams, we’re talking about creating products that are very relevant to the second largest internet population in the world.”

Several governments are now reckoning with, and seeking to rein in, the power of large global tech companies. Australia, Europe and the United States have floated regulations in recent months that aim to blunt some of that power.
India is no different in targeting big tech firms, but much of its focus in recent months has been around protecting its national security and sovereignty — and it has a lot of leverage. The country’s 750 million internet users, with hundreds of millions more yet to come online for the first time, are crucial to Big Tech’s global growth prospects. Facebook (FB), Google (GOOGL), Amazon (AMZN), Netflix (NFLX) and several others have already poured billions of dollars into growing their Indian operations.

The Modi government’s regulations have created a chilling effect on those companies and emboldened Indian apps to position themselves as a better fit for the country’s users. The big question now is whether the government simply promotes and encourages made-in-India apps or creates a regulatory environment where they’re the only ones left standing.

In banning Chinese apps, in particular, India used China’s own tech playbook against it. The world’s most populous nation has largely sealed off its billion-plus people from foreign tech companies for decades, using a massive censorship apparatus known as The Great Firewall. Google and Facebook have both made overtures to China in an effort to be let into the world’s biggest market, but to no avail. Instead, China’s internet ecosystem is made up of homegrown companies such as Tencent (TCEHY), Weibo (WB) and Alibaba (BABA), some of which have become large global players.
India’s move to shut down Chinese tech firms definitely gave Indian competitors a boost — particularly those seeking to replace TikTok, which had more than 200 million users in the country before it was banned. Meanwhile, the government has actively sought to boost homegrown apps: Koo and Chingari were both among the winners of an “app innovation challenge” that received prize money from the government.
These shifting dynamics in India’s digital marketplace are yet another warning sign of what’s been dubbed the splinternet, foreshadowing a possible world where each country sticks to its own apps and abandons the open and global nature of the internet. For now, however, these homegrown apps may find it difficult to compete at the same level unless the government decides to ban Facebook and Twitter, too.

“If the party is on Twitter, a few people on Koo won’t matter,” Mishi Choudhary, legal director at the New York-based Software Freedom Law Center, told CNN Business. “The ability to follow global news and forge connections across borders is a crucial feature for the success of these platforms and must not be overlooked.”

But unseating Big Tech may not strictly be the point, says Anupam Srivastava, a nonresident fellow at the Stimson Center, a Washington DC-based think tank and a former head of the Indian government’s investment agency, Invest India. It’s also about sending a message to companies like Facebook and Twitter: Access to India’s massive internet shouldn’t be taken for granted.

“The effort is to tell them you’re not indispensable,” he said.

Soon after Modi called on the country to become “self-reliant” in May last year, short-form video app Chingari began marketing itself as a homegrown alternative to TikTok. It was downloaded 2.5 million times in six days.

“It was crazy, crazy stuff,” Ghosh told CNN Business in an interview last year soon after the ban. “Banning TikTok was never the business plan for us,” he added. “We were growing organically.”

But he fully endorses the Indian government’s rationale for the ban, arguing that China and its companies can’t be trusted, and Indian user data needs to be in Indian hands to avoid a “security risk.”

While India was willing to ban Chinese apps, there may be limits to how far its government can go with services from other countries. As a democratically elected government, and one that has far closer ties to the United States than to China, it’s unlikely India can completely close off its internet and kick out America’s biggest tech companies in the near future.

“Undergirding all of US-India engagement … is a very strong and growing government-to-government defense, security and high technology cooperation,” Srivastava said. In contrast, India sees itself “in an existential sort of struggle with China” and the app ban was “aimed as a direct message.”

Chingari plans to focus on its home country until it hits at least 100 million users. The app does eventually have global ambitions, but Ghosh said it is committed to “data sovereignty,” with plans to store users’ data within their respective countries.

That may make it more difficult to train the app’s recommendation algorithm, considering the data will be more fragmented than if it were all processed in the same place. But it’s a price Chingari is willing to pay.

Additionally, hedging against geopolitical risks could help Chingari avoid being banned in other markets the way TikTok and others were banned in India.

“India is generally friendly with every country,” Ghosh said, “but you never know.”

Related Topics:India is trying to build its own internet - CNNTech
Up Next