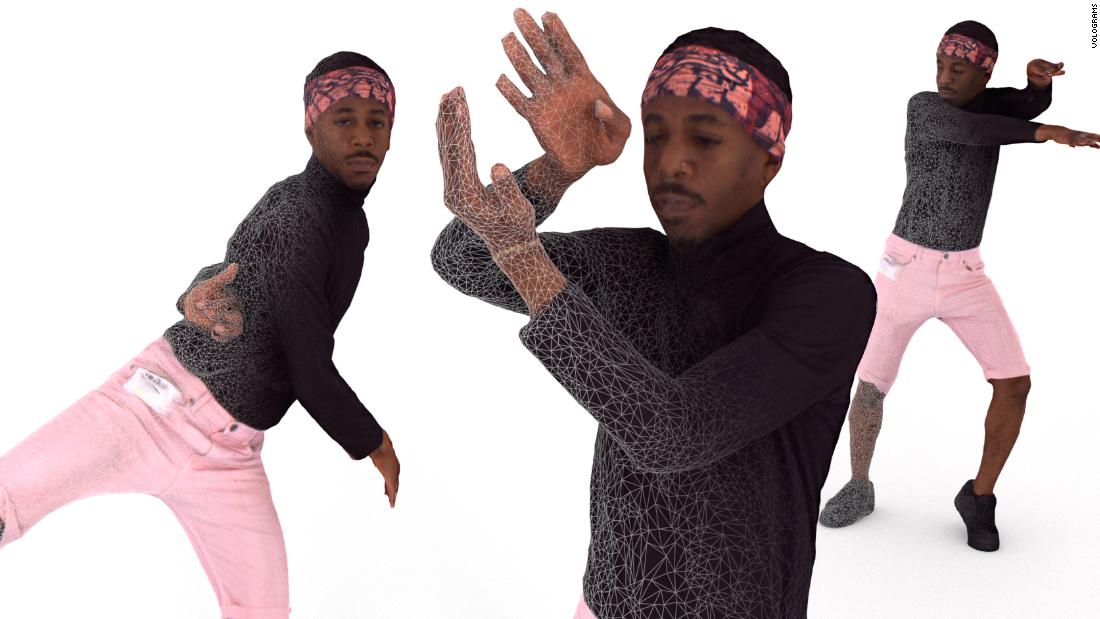 Dozens of cameras surround the subject and record a 360-degree video, capturing its dimensions and volume. The different points of view are combined to create a digitized 3D image. The process is usually performed by technicians from a professional studio, which require a lot of time and cost.

But that could be about to change, as Irish startup Volograms has made the process available to anyone who owns an iPhone using its free Volu app. Launched in the App Store in September and soon available on Android, it is the first content creation app capable of turning standard mobile video into augmented reality, says Volograms.

Although the phone’s camera only captures video from an angle, the app uses artificial intelligence to estimate a person’s 3D shape and texture in areas the camera doesn’t see. It uses algorithms that have been trained on thousands of human models captured in Vologram’s professional studies. It then converts the moving image to a hologram, or what the company refers to as a “vologram.”

Users can play with the vologram creatively, reducing or enlarging the figure and superimposing it on any background, adding filters that change the transparency or color of the image, and mixing realities by adding a virtual doppelganger to a standard video.

The goal, says Rafael Pagés, CEO and co-founder of the company, is that the creation of augmented reality (RA) and virtual reality (VR) content is available to the everyday consumer.

“We wanted to create something that would allow anyone, not just professionals, to create content, play with it, share it,” he tells CNN Business.

Volu also responds to a growing demand for augmented reality and virtual reality content. A report from eMarketer market research company estimates that this year in the United States alone, nearly 60 million people will use VR and more than 90 million will use AR at least once a month, an increase of 36% and 28% respectively, compared to 2019.
Technology is used primarily for gaming, entertainment, and social networking, but as consumers and businesses try immersive experiences, a wide variety of applications could emerge. The Covid-19 pandemic has also generated interest, as people are experimenting with AR and VR technology to replicate face-to-face meetings in a virtual environment. Facebook (FB) has launched a virtual reality application that allows users (represented by customizable avatars) to sit in a virtual conference room with co-workers, and this week announced plans to hire 10,000 people in Europe to construct the “metaverse.”
Other companies have also stepped up to meet demand. UK-based dimension, which has associated with Microsoft (MSFT), creates 3D videos in your high – tech studio, from fashion shows a sporting events. 4D views, a French company, designs and sells its volumetric video capture technology to studios around the world.

But Vologram, which says it has raised 2.3 million euros ($ 2.7 million) in funding since it was founded in 2018, is one of the few that makes volumetric capture available to everyday consumers. The Volu app is free, though the company says it plans to incorporate paid “professional features.” Currently, Vologram’s main source of income still comes from its professional studio service.

Cathy Hackl, a technology futurist specializing in RA and VR, believes there is a huge demand for both “high-quality Hollywood content” produced by professionals and amateur content created on a smartphone. But the latter will be crucial in driving the massive adoption of technology, she says.

“Give people the tools now to access it [the technology] on their phones and creating this content is very powerful, ”he tells CNN Business.

By breaking down barriers to entry, Pagés hopes that Volu will empower a “new generation of creators” and transform communication as we know it.

“That’s just the beginning,” he says. “Right now you live in an app and you can create fun and engaging content to share with your friends and family. But we believe this technology could be easily integrated into headphones or [smart] glasses, so that it can become the next generation camera “.

Related Topics:technologyThe Irish app allows people to take 3D videos on an iPhone: CNN
Up Next

Facebook is planning to change its name, report says