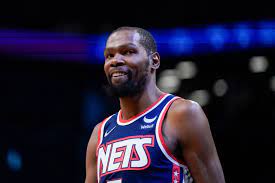 After nearly two months has passed since Kevin Durant requested a trade from the Brooklyn Nets, he met with Nets owner Joe Tsai, head coach Steve Nash and general manager Sean Marks in Los Angeles, as they all ultimately agreed to move forward with a championship and long term success as the ultimate goals rather than seeking a discontinuance of their partnership.

With that being said, the Nets’ NBA championship odds have increased dramatically, as they now have KD back to being fully bought into the team alongside Kyrie Irving and Ben Simmons.

Durant has proven time and time again that his talent alone can will a team to success. During the 2021 NBA Playoffs, he basically single-handedly carried the Nets with a 49-point triple-double in Game 5 against the Milwaukee Bucks in the second round of those playoffs, as Irving was out with a terrible sprained ankle injury and James Harden was fighting through a Grade 2 hamstring strain.

Durant again put up over 40 points in Game 7, but he was literally either a step behind the 3-point line or a smaller shoe size away from helping the Nets move onto the Eastern Conference Finals.

If the Nets had gotten to the Conference Finals, then they almost certainly would’ve made quick work of the Atlanta Hawks, which would’ve gotten the franchise to the Finals for the first time since 2003.

But a lot has changed since then. Irving missed a majority of the 2021-22 season due to his decision to be unvaccinated against COVID-19, and Harden decided to force his way out of town with a trade to the Philadelphia 76ers.

The Harden trade may end up being a blessing in disguise, however, as they got back a significantly younger player in Simmons, who brings comparable playmaking skills to “The Beard” and a far superior ability to play defense, especially out on the wings.

The Nets have had a ton of trouble defensively over these past couple of seasons, and with Simmons now being there to help shut down the opposing team’s best player, the Nets should see significant improvement on that side of the floor.

Yes, the Nets will miss Harden’s ability to create offense for himself, whether it be his stepback 3-pointers, using his burst of speed in getting to the rim, or his overall ability to draw fouls.

However, Harden also showed that he has lost a step in his ability to score the basketball, plus the Nets have plenty of offense to go around with the duo of KD and Kyrie alone.

When you look at the Nets’ roster as a whole, they have some intriguing pieces that can make this team elite offensively, with Joe Harris, Seth Curry, TJ Warren, Patty Mills, and Cam Thomas all rounding out that group.

The team can still use a little bit of depth at the big man position, as talented but inexperienced bigs in Nic Claxton and Day’Ron Sharpe present the only options the Nets have at that position heading into the season.

But that’s not to say that the Nets will completely be hamstrung by that. The modern NBA is known for favoring a smaller style of play. Plus, the length of Durant and Simmons should at least help complement Claxton and the Nets in rim-protecting situations.

The East is going to be extremely strong next season, with the Boston Celtics, Bucks, Sixers, and Miami Heat all expected to compete for a spot to represent the conference in the Finals next season.

The Nets’ success is ultimately going to come down to how KD and Kyrie respond to the pressure of big moments during the playoffs, but both guys have proven they can step up in the Finals before and have rings to show for it.

The friendship of Durant and Irving appears to be stronger than ever, so whatever distractions that came from the trade request from Durant don’t seem to have put a dent in their dynamic.

With that said, expect the Nets to re-establish themselves as one of the best teams in the league next season.

The 14 Amazing Benefits of Doing Sports

Injuries Throughout The 2022-2023 NFL Preseason