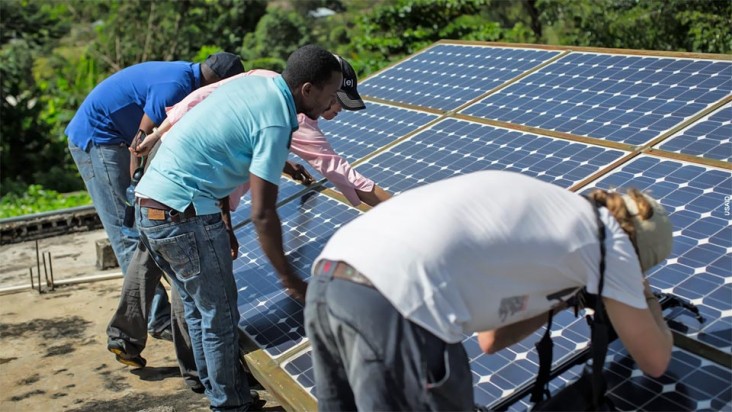 Inverters convert the direct current generated in the photovoltaic system into alternating current. However, modern inverters can do much more. In addition to power conversion, you will take on a wide range of tasks, from frequency control and performance optimization to energy management. Here you can find out what you absolutely need to know about inverters.

The function of an inverter in the photovoltaic system

First of all, What is an inverter? The main task of inverters is to convert the direct current generated by the photovoltaic system into alternating current.

Direct current is current whose polarity is constant over time. Alternating current, on the other hand, changes polarity at regular intervals. An alternating current frequency of 50 hertz is usual. This means that the current changes its polarity 50 times per second.

This conversion is necessary because our power grids and domestic power lines work with alternating current. So the conversion is done to make the photovoltaic electricity “compatible”. After conversion in the inverter, the electricity from the solar power system can then be fed directly into the grid or used in the house.

Why our electricity grid works with alternating current

Our power supply is based on alternating current, since only alternating current can be transported to high voltage levels using transformers. High voltages are essential when transporting electricity because transport losses can only be kept low at high voltages. The development of new electronic components in recent years has also made it possible to generate high-voltage direct current and thus high-voltage direct current (HVDC) transmission. However, since the power grid is still based almost exclusively on alternating current transmission, solar inverter remain an essential part of the photovoltaic system.

Other tasks of modern inverters

In addition to the main task of an inverter, the conversion of direct current into alternating current, the devices nowadays also take on numerous other tasks.

Every photovoltaic system has a so-called Maximum Power Point (MPP). At this point, the combination of current and voltage values is optimal, so that optimal performance can be tapped. The inverter manages to keep the solar modules constantly in the MPP by changing the internal resistance at regular intervals. In this way, the photovoltaic system can continuously provide optimal performance. In special cases, the inverter may leave the MPP for a short time. An example is the cooling of the inverter when the temperatures in the housing are too high.

The power grid is an extremely sensitive system. In order to avoid a grid collapse, or even just a grid overload, certain grid parameters must be observed. Above all, a constant frequency of around 50 Hertz is essential for the stability of the power grid. Therefore, an inverter is obliged to regularly monitor the voltage, frequency and impedance in the grid. If these values ​​rise above a prescribed limit value, the inverter has a disconnecting device that automatically disconnects the device from the power grid. If the frequency rises slightly, however, it only has to steplessly reduce its power and thus supports grid control.

In addition, each inverter battery has a communication interface to the photovoltaic system. The voltage, current and the current output of the system are monitored here. Malfunctions can thus be identified quickly. It is also possible to forward the yield data to corresponding online services or energy management systems. These help system owners to use more of their own electricity.

If an inverter is dimensioned too small and is therefore overloaded, there is theoretically a risk of overheating. Like a laptop, for example, an inverter also has a cooling function that prevents the device from overheating through regular heat dissipation.

Another safety aspect: Solar modules cannot be switched off that easily. In order to be able to work on the inverter while the system is in operation, each device has a DC disconnect device. This can decouple the inverter from the solar modules under load. Without this device, the modules would have to be darkened during maintenance work.

A flat rate of 10-15% of the total costs of the photovoltaic system can be set for an inverter. In practice, the price range for inverters for systems on single-family houses is between $1,000 and $2,500. You can calculate around $200 per kilowatt of installed photovoltaic power. In addition to the size of the system, the individual price also depends heavily on the quality, the location and the scope of the inverter pure sine wave.

The different types of inverters

The most commonly used inverter is the string inverter. It operates several solar modules connected in series, the so-called string. In most cases, modules with the same orientation, inclination and shading are combined in a string, because string inverters only have one MPP tracker. In this way, you cannot react optimally to the special requirements of individual modules. By bundling modules under the same conditions, mismatching losses and shading losses are minimized. If you use so-called multi-string inverters, the inverter even has several MPP trackers. This gives you the option of integrating several strings with different module inclinations and orientations in one inverter.

Compared to module inverters, string inverters have the great advantage of increased efficiency. In addition, maintenance is simplified because the inverters can no longer be housed on the roof, but in the building services room. All of this leads to increased effectiveness and a better price-performance ratio for normal house roof systems between 2 and 30 kW.

A 2000 watt inverter is an inverter that is attached directly to the individual photovoltaic module. Compared to string or central inverters, however, module inverters only play a subordinate role because they are less efficient. They are therefore relatively expensive, especially for large systems. In addition, module inverters in large photovoltaic systems are very susceptible to faults, since there is an increased potential for errors due to the large number of devices. The attachment to the module also has the disadvantage that the maintenance and replacement of the inverters is considerably more expensive.

Module inverters are advantageous for small mobile photovoltaic systems in which the light and shadow conditions change frequently. Then it may be that a string or central inverter can no longer react quickly enough and the modules no longer deliver optimal performance. The module inverter, on the other hand, can react individually and quickly to changing radiation incidents on the individual module. Another positive aspect is that module inverters do not have to be wired via direct current. They also use 50% less cable compared to conventional PV systems.

Central inverters are mostly used in very large roof or ground-mounted systems from 30 kWp. As a rule, all modules are subject to similar inclination and irradiation conditions. The module strings can therefore be brought together centrally via a generator connection box. Since there is only one inverter, maintenance is greatly simplified. There are often remote maintenance contracts in which the system is permanently digitally monitored from afar. Some of the power from a central Inverter can be fed directly into the medium-voltage grid