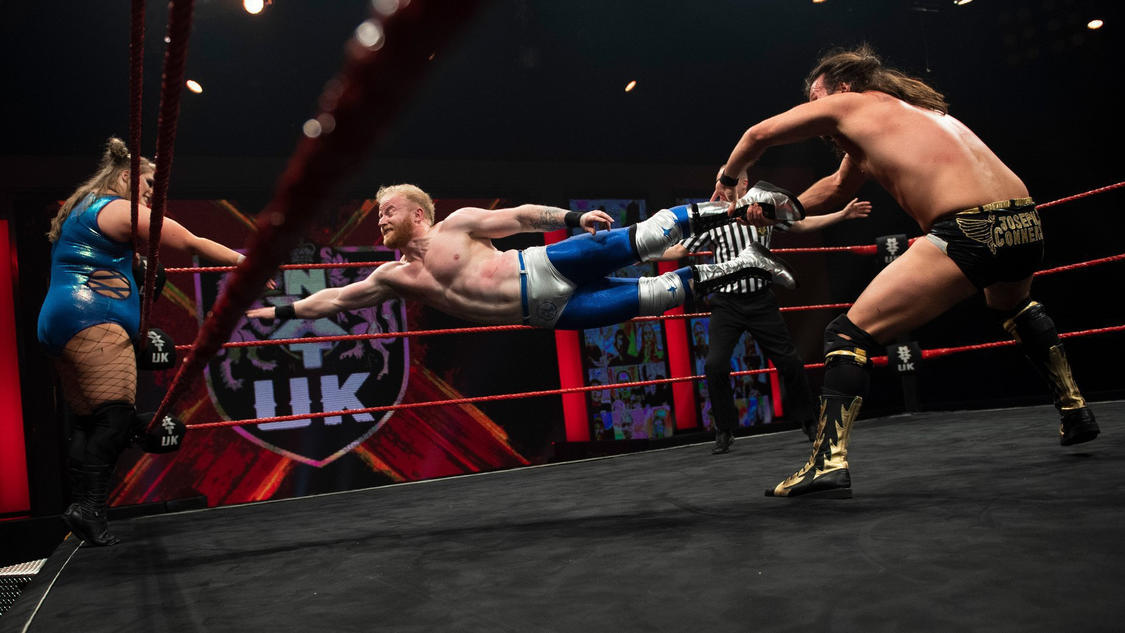 It seems like a distinct possibility, especially after the first-ever NXT UK Champion outlasted the powerful Dave Mastiff in a savage Heritage Cup Rules Match, 2-1 in five rounds.

Following a scoreless Round 1 that featured impressive feats of strength from each competitor, Bate caught his larger adversary by surprise when he launched himself from the middle turnbuckle directly into a sunset flip to keep Mastiff’s shoulders down for the three-count and the 1-0 lead!

After being met with two jabs to the jaw to start Round 3, Mastiff found his game by clubbing his opponent with several stiff blows to the face. Moments later, Mastiff returned the favor with a surprise rollup when Bate was attempting an airplane spin to even the bout at 1-1.

Round 4 saw Mastiff nearly plant Bate through the canvas with a scoop slam and effortlessly chuck him across the ring before taking the fight to ringside and repeatedly slamming Bate against the ringside barriers.

Bate persevered, however, and in Round 5, he shook off a thunderous German suplex and clobbered Mastiff with an airplane spin and a twisting senton from the top rope for the hard-earned victory.

Following his spellbinding entrance and a unique strut to the squared circle, Teoman impressed with a decisive victory in his NXT UK debut against Danny Jones.

Teoman appeared a quick stepper from the opening bell, controlling the bout with some early mat-wrestling and disrespecting Jones with a slap to the head.

Jones briefly fought back with a flurry of punches and a backstabber, but Teoman claimed the win when he thrice landed on Jones’ back with a double stomp and trapped him in a crossface for an immediate tapout.

That’s two wins in as many weeks for Kenny Williams and Amir Jordan, but what did each of the victories have in common? Some questionable tactics from Williams.

This time, Williams booted Flash Morgan Webster with a back kick below the belt, then spiked him into the mat for the victory.

After the three-count, Jordan questioned Williams about his dirty methods as the partners had their arms raised by the official and made their exit. Controversy or not, Williams and Jordan are on a roll. Could they be closing in on an NXT Tag Team Title Match?

Piper Niven finally got some backup in her ongoing battle with Jinny and Joseph Conners in the form of Jack Starz, and the move paid immediate dividends.

Jinny and Conners trash talked their opponents on a nearly constant basis and used a couple timely distractions to help each other get the advantage on their respective foe.

A lunging tag from Starz to Piper meant that Jinny had to enter the bout, and The Fashionista led Niven on a wild chase that concluded when Niven ran right through her and chucked her across the ring before landing a splash and several right hands.

After Conners tagged back in and berated Niven, he was met with a slap to the face from Niven and a wicked suplex from Starz.

The first-time partners sealed the win when Niven hit Conners with a Piper Driver and dropped Starz on top of him for the 1-2-3!

Which WrestleMania World Championship victory tops them all?

Grimes, Knight battle to carry on the legacy of “The Million Dollar Man”