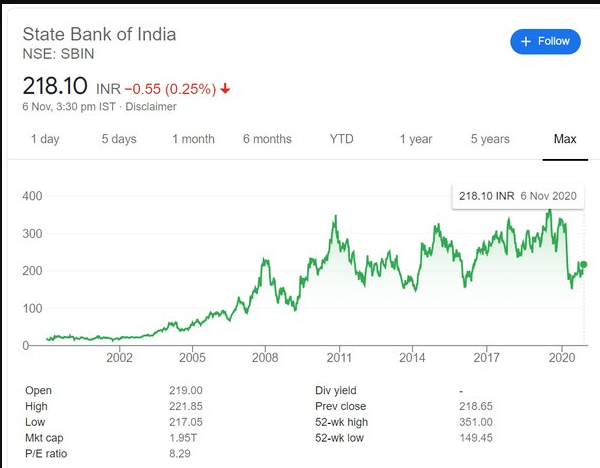 The State Bank of India or SBI is an Indian multinational public sector bank that the Government of India owns.Formerly called Imperial Bank of India, itwas incorporated in the year 1806 and is headquartered in Mumbai, India. The SBI is one of the most trusted names in the banking sector and is the largest commercial bank in the country.

Today, it has many subsidiaries, such as SBI Life Insurance Ltd., Yes Bank, SBI General Insurance, etc., and is the 43rd largest bank globally. It holds a record in the Fortune Global 500 and is ranked at 205thposition as the world’s biggest corporation in 2021. SBI is the biggest lender,with approximately 23% of the market share by assets and about 25% byloans and deposits.

Here are some incredible facts about the bankand SBI share that you must know:

Do you want to own anSBI share? If yes, you find them listed on both the National Stock Exchange and Bombay Stock Exchange with the symbol SBIN and code 500112, respectively.

The SBI Bank share is traded in India and London, the capital of England and the United Kingdom. The shares get traded on the London Stock Exchange as SBID.

The State Bank of India offers banking and financial services, wherein you open a Savings or Joint Account with the bank. The bank also offers differentloans and investment options to customers. You may invest in the Stock Market after researching the shares and SBIN share price.

Product Design Studio at the intersection of technology, business and users.