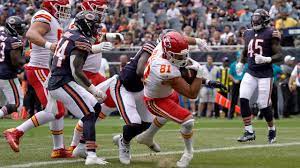 As an NFL fan, injuries are dreadful. You hate seeing your favorite players get hurt. The players themselves face so much adversity in recovering from injuries as well, especially rookies. They are brought in with such high expectations but a devastating injury can really be demoralizing for the fan, the team, and the player himself.

Throughout the 2022-2023 NFL preseason, we have already witnessed some atrocious injuries to some of the best players or prospects in the entire league. In just one matchup between the Bengals and Giants during SNF, we saw both rookies Kayvon Thibodeaux and Darrian Beavers go down with knee injuries.

The number 5 pick in this year’s NFL draft went down during Sunday Night Football with a sprained MCL. To be frank, NFL fans and Giants fans are extremely lucky to see just a sprained MCL. The injury was caused by a low block from a Bengals lineman that caused Kayvon’s entire knee to bend inwards.

Off the initial eye test, I thought ACL tear but Kayvon got extremely lucky and was only diagnosed with a sprained MCL. This means that Kayvon can return this season and play for the New York Giants eventually.

This injury is extremely dreadful for Giants fans. Beavers was diagnosed with an ACL tear which means he is out for this entire season. Throughout training camp and their first preseason game, the Beavers looked dominant. The 6th-round pick was playing lights out. Sadly we will not see him succeed until next season.

Another Giants athlete that goes down. Graham Gano was diagnosed with a concussion after diving for a tackle. Concussions are usually not very worrisome but Gano is a veteran. As an older player, his health becomes more prized and his recovery slows down.

It is also less than ideal to see head coach Brian Daboll mention in a press conference that he is most likely going to add another kicker to the roster. Gano’s health is their main priority so the Giants may take their time bringing him back.

On Friday night, the Rams lineman Logan Bruss tore both his ACL and MCL. Bruss was the Rams 3rd round pick and also their first pick. Bruss had started in both the preseason matches and was showing some real brightness in his game.

However, freak accidents happen. Like Sean McVay said, “But [you] put your arm around him, you help him attack the rehab the right way. And I trust that he’s going to do everything in his power to come back better next year than he was this year.” It is very difficult as a coach to set such high standards for yourself and your team but having rough injuries set you back.

On Friday, versus the New England Patriots, Matt Corral suffered a Lisfranc ligament tear which is the tear of a ligament in the foot. Corral’s injury occurred when another player stepped on Corral’s foot which forced Matt out of the game. He did not return that night and left the stadium in a walking boot.

Though Corral was not having a huge preseason showing, he was the Panthers 3rd round pick and was their future quarterback. We all know what Matt Corral did at Ole Miss. He was a beast and it’s so unfortunate to see him go down to this injury.

Previous reports say that there are usually two routes for recovery from this injury. Surgery or no surgery. No surgery means the risk of reinjury would be higher but surgery makes the recovery time almost double. This is a decision Matt has not made yet and is still deciding.

Injuries suck. As a fan of the sport, you never want to see anyone go down or their future be stripped away from them. Let’s hope that during Sunday Night Football tonight we can see a clean game without any injuries. We want football, no injuries!