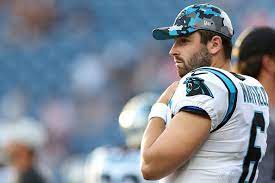 Baker Mayfield Could Be the Long-Term Option

Baker Mayfield is in a prove-it year for the Carolina Panthers. Carolina wants to know if he is going to be the long-term answer at the quarterback position or if they are going to need to draft someone in the first round of the 2023 NFL Draft though.

Mayfield wants to prove it to everyone after he was treated horrendously by the Cleveland Browns organization. The fact that Cleveland wanted an adult in the quarterback room and traded for Deshaun Watson from the Houston Texans was an ultimate slap in the face to him.

There are teams that are looking for backup quarterbacks or if someone gets hurt, they can potentially trade for Sam Darnold. As of now, Darnold will be the backup quarterback for Carolina, but all can change. Rookie Matt Corral got hurt for them and he will be out for a while. P.J. Walker could be the backup option for Carolina if Darnold was traded to another team.

The Detroit Lions could use a backup quarterback for Jared Goff and the Seattle Seahawks could use a better option at the quarterback position not named Geno Smith or Drew Lock. Sam Darnold blew his chance to be ever a starting quarterback ever again in the NFL.

The Carolina Panthers could potentially get a late-round or conditional draft pick back for Sam Darnold. Would the Cleveland Browns maybe ask for Darnold if they don’t feel like Jacoby Brissett can help them for 11 games with the Deshaun Watson suspension?

Baker Mayfield Gets His Shot At Revenge

Baker Mayfield gets to face off against his former team in Week 1. There will be a ton of headlines entering that football game. The game will be played in Carolina and not in Cleveland. Baker Mayfield would have received a lot of boos if he was going back there. However, he is going to want to stick it to them big time.

This could be a game where he torches them big time. The offensive line is not very good, but the addition of Ikey Eknowu, who was drafted sixth overall out of North Carolina State, will likely keep him upright against former teammate defensive end Myles Garrett. Baker Mayfield knows everything about this Cleveland Browns defense.

He is going to want to be on point with Christian McCaffrey, Robbie Anderson, and D.J. Moore in this one. After his shot of revenge, they could have a shot at the postseason though.

A Chance At the NFC Wild Card

The NFC is not as strong as the AFC. Head coach Matt Rhule is basically coaching for his job this season. This is now or never for him and the Carolina Panthers. Baker Mayfield can lead the Carolina Panthers to a 9-8 season and potentially a wild card spot in the NFC. If that’s the case, he is going to be locked long-term for this franchise and everyone’s jobs will be saved though.