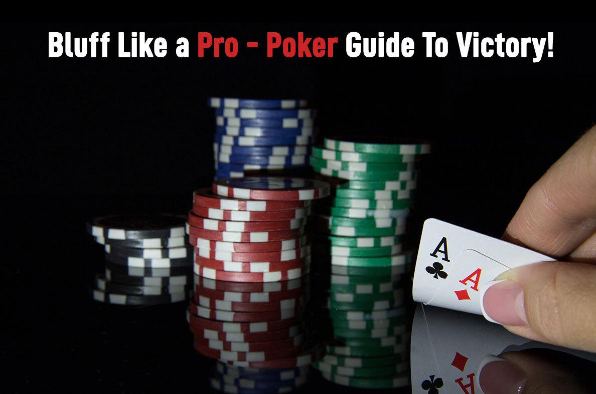 The more faces you have, the better Poker you can play. That is how it is in the world of Poker, where bluffing is king. What else could one expect of a game with the most muted and expressionless face named after it?

As a game, Poker has existed for thousands of years. Invented in China at around AD1000, they slowly spread across the entire planet like wildfire. As of now, over 10,000 variants of card games exist in the market, including Solitaire, Patience, Blackjack, Teen Patti Poker, and others. However, Poker reigns as the champion by ranking at the top in popularity among the players.

At the moment, Poker is played equally by amateurs and professionals in real-life casinos and online platforms. The online platforms offer good competition and exciting play for all kinds of gamers. If you are brand new to this game, you should go over the poker guide and check out the rules that govern the game.

If you want to play like the top professionals and bluff your way to victory, the detailed guide will give you the right tips to get your way in the game.

Don’t Be The One To Limp First.

To begin with, this stands as one of the most important ways to avoid losing the game at an early stage. If you are the first player to enter the pot, you should not limp. After making a limp, it is impossible to expect a win unless flops can occur. Crawling is different from raising, where there is a chance to win after making a raise.

Limping means to call the big blind pre-flop, so if you do that, the players behind you in the game gain better pot odds. Therefore, winning diminishes as multiple players start following your game.

If you plan on limping, you should wait your turn and limp right after one player already does it. In that manner, you will not reveal any specific pot odds that could hamper your game. Always remember hiding your odds and keeping your cards close to the chest is key to winning the game.

Trick/Bluff the player with your Draws

The definitive trick to playing Poker is bluffing your way to the top. You can trust this statement to the core. Ineffective bluffing with low confidence can make you lose a lot at the table, and none of you want that.

Trust the cards you have in your hand and let them guide you through what consecutive steps you should take in the game. In such a case, a technique called “semi-bluff” really comes handy for the player.

If you use this technique, you should take the cards that have potential and could evolve into better sets. This could include plays like flush draws, straight draws, and similar ones.

These cards can be used as backups if the bluff gets called by the opponents. Thus they have popularly earned the moniker of ‘semi bluffs.’ This type of play requires practice and a ton of observation. Also, this kind of play does not encourage you to bluff straight out at the start. Players are often found to do this, and if you genuinely want to win, it is strictly a big NO.

More than Often Steal the Blinds

One of the most fundamental ways to bluff in Poker is to steal the blinds whenever possible. The act gives the idea to the people that you might have a better hand than them and makes your rivals cautious.

The fact is you do not need to have a great hand. The game plays on the sentimentality of the players depending on them being tight and weak.

Tight players often do not fight back when small blinds are made, and it is in their character to raise the stakes instead of folding them.

Surprisingly enough, in many cases, the players can win an easy pot applying this technique after they have judged the abilities and motives of their rival players.

Force Your Way through When Rivals Show Weakness

RIghtly termed the “Poker Face,” players have to show consistency even when they have a terrible hand, or their actions may give away the game to the opponents. Poker is a game shrouded in deceit; therefore, each expression, hand movement, and other bodily gestures are crucial to the game. As soon as you observe something untoward about the opponent, you should immediately rush in and attack the game. To gauge what the opponent is up to, notice if they fold their weak hand when faced with multiple bets. This opens a sure window for an attack as it reveals a chink in their set armor.

If the opponent shows hesitation in a heads-up pot, you should pressurize them with aggressive bluffing. The right moment to use everything you have in your arsenal is this, including plays with good blocker effects, including pure bluffs and semi bluffs.

These Poker strategies are applicable in offline and online formats of the game. If you are engaged in online Poker, you should take advantage of the online sites’ statistics that come as important helping features. If you want to keep getting better and improve your skills, then more practice matches and learning will introduce you to loopholes of your rivals and evolve your hold on the game, bringing your style to the level of a Poker professional.

How to Have a Great Hookup Without any Regrets

How to Get Started Line Dancing – The Ultimate Guide